Cultural Transformation Comes One Person at a Time

01 Mar Cultural Transformation Comes One Person at a Time

Posted at 17:38h in Uncategorized by admin 0 Comments
0 Likes

Steve Tobak, from CBS MoneyWatch, wrote: “Think about it. When one person influences a few others, there are two major effects:

For those who are Christians and have read the Bible we know that transformation happens one person at a time. God, from Genesis to Revelation, chose one person at a time and recorded their stories so we could understand, among other things, how important one is in the transformation of many. God knows each one of us intimately and He wants us to know that He believes we are “one” that He believes can make a difference in our respective areas of influence.

Abraham is a great example of how God chose one to transform the world. Moses is another example. Moses was the one who God prepared to be the one that would lead His people from slavery. How about Esther? What if she, feeling small and insignificant, had dismissed her ability to make a difference in the lives of thousands of her people by saying, “I am just one, how can I make a difference?” 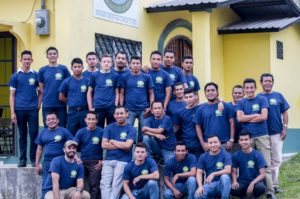 Mission UpReach is working toward graduating 5,000 men and women from our training programs in the next 20 years. Each one of these men and women, after being equipped in our Christian Leadership Training, will be individuals who will have the opportunity to be the one that influences for the better their families, their neighborhoods and their country.

Our prayer is that among the 5,000 that graduate from our training there will be a significant percentage that catch the spirit of the first-century church. In the first century the church spread through the Roman empire like a wild fire. Over the following two centuries the ones who were transformed by the Gospel then transformed the entire Roman society.

Please pray for Western Honduras. May the Kingdom of our Lord come here in this region as it is in Heaven. May it permeate every town and village and may every man, woman, boy and girl know Jesus as Lord.