Another Humanitarian Immigrant Crisis on the Southern Border

07 Feb Another Humanitarian Immigrant Crisis on the Southern Border 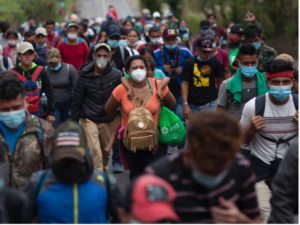 As of this writing, more than 9,000 immigrants have just forced their way through the southern border of Guatemala headed towards the US southern border. They are making comments on camera to Newscasters that, “they have heard that President Joe Biden will put them on a 100-day path towards citizenship.” They are also vocalizing, in their own words, “that he should fulfill his campaign promise and let them in the country so that they can have a better life than the one that they have at home in Honduras.”

These are just the first of many, many more that will be coming in the near future due to their understanding of the rhetoric they have heard throughout the latest Presidential campaign. Cleary, our newly elected President did not intend to stimulate a tidal-wave of illegal immigration of Hondurans headed for the US. However, it is a natural outcome of the austere economic conditions that the average Honduran faces combined with a Biden-Harris campaign platform of being more accommodating towards immigration.

The prospect that one can leave his or her life in Honduras, with its ubiquitous lack of gainful employment, and come to the US where someone can earn  $15 per hour or more has an intoxicating effect on the Honduran population. The impact is similar to the effect that the discovery of gold in California had in 1848 in our own country. In January of that year gold was discovered at Sutter’s Mill, California and in the following wave of migration more than 300,000 people came to look for gold. In 1848 the overall population of the United States was 17,000,000 which means, that about 1.8% of population uprooted itself and moved to California. Today’s population of the United States is 328,000,000. Today, a 1.8% migration of the population moving to California would be equivalent to almost 6,000,000 people moving from the East to the Pacific Coast.

I mention these facts to impress upon you the power and attraction that a “gold rush” has on the human psyche. This dream of a better life compelling immigrants to come to the US illegally is nothing new as is evidenced by the fact that there are more than 1,000,000 Hondurans already in the US. This is 12.5% of the entire population of Honduras. The allure of a better life free from the problems of hunger, poverty and deprivation are incredible motivators that compel people to take huge risks. Unfortunately, there is much misinformation that is being touted in the US news that does not take into account the panorama of causes and effects that surround this phenomenon. So many of the comments that I read are super reductionistic and miss the weightier concerns that lie underneath the surface. And then there are those, on both sides of the political aisle, who simply see this as a means to build power among their supporters. If we ever hope to be able to support an immigration policy that truly helps our own population as well as those who deserve the opportunity to come and live here, we first have to seek to understand a wide variety of underlying causes that are driving this headlong and desperate attempt by people to immigrate.

To some, the issue is one of the US being true to its values expressed in the poem memorialized on the Statue of Liberty. You know the one that I mean, it is called the “New Colossus” and reads like this:

Not like the brazen giant of Greek fame,
With conquering limbs astride from land to land;
Here at our sea-washed, sunset gates shall stand
A mighty woman with a torch, whose flame
Is the imprisoned lightning, and her name
Mother of Exiles. From her beacon-hand
Glows world-wide welcome; her mild eyes command
The air-bridged harbor that twin cities frame.
“Keep, ancient lands, your storied pomp!” cries she
With silent lips. “Give me your tired, your poor,
Your huddled masses yearning to breathe free,
The wretched refuse of your teeming shore.
Send these, the homeless, tempest-tost to me,
I lift my lamp beside the golden door!”
-Emma Lazarus
November 2, 1883

The ideals expressed by Emma Lazarus in this poem are an expression of the American ideals that compelled our country into greatness. Although our country is not perfect and never has been, one of the reasons that she is the greatest nation in the history of mankind is that, albeit haltingly and imperfectly, she eventually championed these ideals in very real and practical ways.

In the next couple of months we will be exploring different facets of this humanitarian crisis in order to seek a better understanding of key drivers that compel people to risk everything in a gambit to have a better life. Secondly, we will look at what might address the issues that become drivers behind illegal immigration. Our worldview is Christ-centric, and we believe that ultimately a personal and saving relationship with Jesus of Nazareth as Lord is THE ANSWER. So, any suggestions that we have of what could be done to truly help Hondurans live better lives will always begin with that focus. Please be praying for Honduras. The COVID19 pandemic and two hurricanes back-to-back have only exacerbated an already difficult situation.