The Concert Heard “Around the World”

09 Nov The Concert Heard “Around the World” 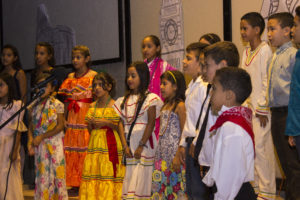 Last month, our Children’s Choir, led by Dakota Nowell and Brittany White, had their second musical performance. The concert, titled “Around the World”, showcased nine songs in six different languages. The kids had been preparing for months for this one night and all their hard work shined through. While it’s impressive enough that they memorized each song, the fact that the majority of the songs were sung in two-part harmony is an even bigger accomplishment. In Western Honduras, there isn’t a culture of singing, especially singing in parts. Immediately after the concert, the Children’s Choir began rehearsing for the Holiday Musical that will take place in early December. We are excited for these children and proud to be able to give them the opportunity to develop their love for music.