Posted at 10:53h in The Moses Project by admin 0 Comments
0 Likes 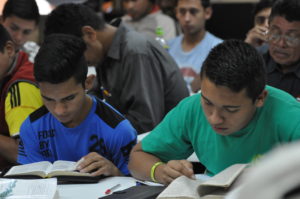 The issue of avoiding poverty by creating self-sufficiency has been debated for quite a long time. The following excerpt is from the Religious Intelligencer in 1826 by 12th century philosopher Maimonides: “Lastly, the eighth and the most meritorious of all, is to anticipate charity by preventing poverty, namely, to assist the reduced brother, either by a considerable gift or loan of money, or by teaching him a trade, or by putting him in the way of business, so that he may earn an honest livelihood and not be forced to the dreadful alternative of holding up his hand for charity. . .”.

We are not only trying to teach the Moses Project boys how to be community leaders but to also be disciple makers in those communities. We are in a constant balancing act here at the Moses Project. We balance the educational, vocational and spiritual development of these young men during their six years with us.

Some of the boys (16 of the 45) have made the decision to make Jesus their Lord and Savior. While we want them to be spiritual leaders in their families and communities and to have the same view of their communities as God does (as a community in need of the redeeming blood of Christ), we also want them to be self-sufficient.

The element of self-sufficiency is what drives us to continually look for ways to train these young men in trades that will allow them to reach that goal. The element of spiritual leadership is what drives us to continue to pour into their lives and teach them all that Jesus has commanded us to. Since 1826 or earlier, we have debated the issue of self-sufficiency. The excitement of seeing a new church be born and grow can cause us to short circuit its development by placing people on foreign support. We wouldn’t dream of taking our kids’ exams for them in high school just because we are ready for them to graduate and don’t want to see them struggle through the process of learning and retaining the knowledge presented in the class.

That idea sounds and is absurd, yet we do the same with churches when we short circuit the growth cycle by placing the preacher on foreign support thus making him dependent on charity. If we will take the time to really invest in these brothers who have a desire to work in the Kingdom and teach them how to provide for themselves, they will grow to levels that we can’t even imagine because we will have given them the satisfaction and pride that comes from knowing that they can earn their own way.