Posted at 14:09h in Uncategorized by eharbison 0 Comments
0 Likes 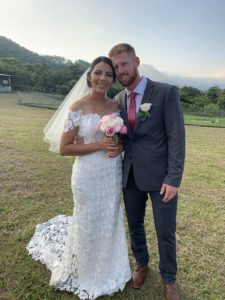 If we can be credited for nothing else in our 11 years in Honduras, we can at least take some credit for a few marriages between U.S. interns and Honduran nationals.  This October, one of those couples got married in Honduras.  Landon Anderson married our own Yulema Reyes.  Yulema, as many of you know, directed our DESEO program for several years and worked in that ministry for over 9 years.  Landon came to Honduras as a missionary apprentice through the AIM (Adventures in Missions) and after his apprenticeship ended, he decided to stay on with Mission UpReach.  He spent a lot of his time helping us develop our horticulture department at the Moses Project and later began devoting all of his time to church planting.  Landon and Yulema will continue to work in Corquin and Potrerillos.  Yulema was able to finish her undergraduate degree in Psychology back in May.  She and Landon will make a great team as they serve the churches in their region.  We wish them well and can’t wait to witness how God uses their union for His Kingdom.