Posted at 08:31h in Uncategorized by eharbison 0 Comments
0 Likes 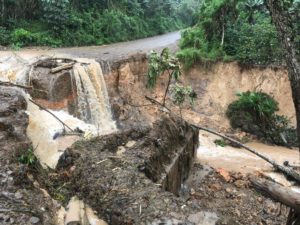 November has brought levels of devastation to Honduras that we have never seen before. We were astounded by the destruction wrought by Hurricane Eta, and then just 2 weeks later Hurricane Iota came through even WORSE than Eta. Recently Honduran Foreign Minister said that hurricanes Eta and Iota have left 276,000 people evacuated, 123,000 rescued from the waters, 130,000 in shelters, 35,000 homes destroyed or damaged and 47 bridges destroyed with a further 57 bridges damaged. The absolute accuracy of these numbers is unsure, but they give an idea of how big the affect has been on Honduras.

Bridges are washed away, roads are closed due to flooding and landslides, the airport is under water, people had been waiting on their roofs to be rescued for days… The photos are jarring. Social media is still filled with bulletins of people searching for the whereabouts of family members, of requests for help in digging out houses under 5 feet of mud, and of news stories that you think can’t get any worse. People are crowded under gas station roofs, under bridges, and if they’re lucky, in shelters for protection. And COVID? How are people supposed to protect themselves from that when many only just barely escaped with their lives? 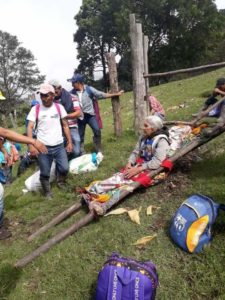 Many individuals and organizations are trying to help the thousands upon thousands of people without basic food security, access to potable water, and sanitation and hygiene services, but it sometimes feels like just a drop in the bucket.

Although our town sustained significantly fewer damages from these disasters than other areas of the country, it is clear that everyone has a family member or friend who has lost everything in the floods. Not one Honduran has been untouched by this.

Mission UpReach, the Church of Christ in Corquin, and Inversiones Manos de Jesus are working together to help communities devasted by the hurricanes. Such communities as Cipresal and Caudate in Ocotepeque have lost all their crops, and according to local accounts, they sometimes have to collect muddy ears of corn to wash and cook in order to satisfy their hunger.
In the area of San Manuel Colohete, where a landslide killed at least 8 people, about 200 people have lost everything, and we have been trying to get aid to these communities.

Some communities are completely cut off due to destroyed bridges and roads and unable to receive food. In order to get supplies to them, we took a vehicle as far as we could, switched to a motorcycle to get it to the urban center, and the people of the communities arrived on horses and on foot to receive the food they so badly needed. We were able to get them donations of
beans, corn, rice, chicken, tacos, radishes, sweet chili and clothes.

In the northern part of the country, specifically San Pedro Sula which sustained some of the greatest flooding and loss, we are supporting some families of our church members. Due to the limited access of the area caused by the hurricane damage, we cannot visit them personally, but we have sent monetary support.

We hope to do much more for our people who need a lot at this time. We continue planning visits to the communities trusting in God that the streets will soon be in good condition.

A renewed hope is starting to appear as resilient Hondurans support each other and international communities step up to aid in restoration.

If you feel called to join us in helping Honduras during these unprecedented times, go to missionupreach.org to donate.

And, please, continue to pray.